Northwest Lexus | Blog | The Sphinx’s Nose: Why the Lexus spindle grille is the best in the business

The Sphinx’s Nose: Why the Lexus spindle grille is the best in the business 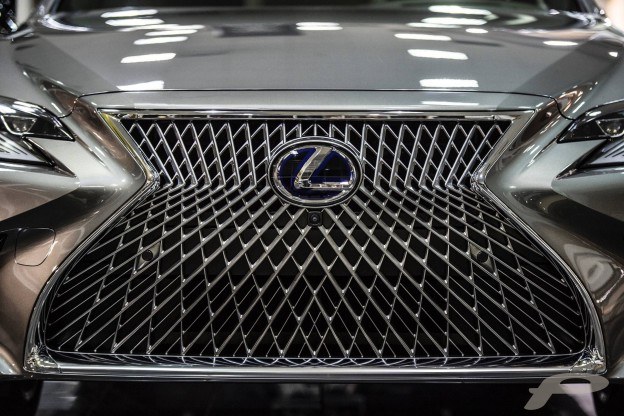 A good design element is something that stands out and is immediately recognizable as part of a visual signature. Ideally, it’s also something that nobody has done before, so naysayers can’t accuse you of being a copycat.

With that in mind, what would you say is Lexus’ most successful design element so far? We agree. It’s that big, bad, world-renown spindle grille.

Launched in 2011 on the LF-Gh hybrid concept (which premiered at the New York Auto Show and eventually inspired the 2013 Lexus GS), this large hourglass-shaped grille has had much ink spilled over the effect of its pronounced look… and let’s face it, not all this press has been positive. So why is Lexus still using it, and why do we like it so much?

Here are the three main reasons why the Lexus spindle grille is the best in the business.

When the LF-Gh was unveiled in 2011, the reactions to Lexus’ new dental work came pouring in. People looked at the first iterations of the grille and some loved it, while others really, really didn’t. For the latter group, it was too predatorial, too raw and too, well, big, for the Lexus brand they knew. Here’s what the first Lexus Spindle grille looked like on the LF-Gh hybrid concept:

Contrast that, then, with the front profile of the new LC 500.

Today, the grille has been fully integrated into the rest of Lexus’ design language, complementing the rest of the car’s striking features. Looks more at home, right?

2: It unifies styling while providing engineers with great flexibility.

One of the purposes of the large spindle in the front of all Lexus models is to simplify the looks of vehicles across the brand. Why? Because it offers so many possibilities to the engineers.

To understand how, let’s compare two wildly different vehicles, the base-model IS 300 and the high-performance GS-F. On the small IS, very little cooling and air is needed to keep the engine happy. However, you need a lot more oxygen to feed and cool the GS’ massive V8. But if you look at both car’s front end, they’re not massively different. Why? Because that grille is large enough for the biggest engine’s requirement, yet can be adapted to suit the smaller car’s needs.

3: It gave Lexus an identity.

One way of making sure a brand has any hope of being successful in the long run is cultivating a distinct personality. Just ask Apple, Nintendo or Nike. A decade or so ago, Lexus had been building high-quality automobiles for decades, but some said it lacked something to set them apart from other luxury automakers. Thanks to the spindle grille, Lexus now has a look that makes them stand out in a crowd. Plus, it gets people talking (and writing and reading blogs), which is always good. It also helped the brand’s designers cultivate a look by being a bold, futuristic leading example upon which to style new vehicles. Never again would Lexus be afraid to go for bolder lines. This shift in philosophy resulted in some truly striking-looking cars, like the new LC coupe or even the RX crossover.

These are just three of the reasons why we like Lexus’ spindle grille. Give us a shout on Twitter to let us know what you think of Lexus’ loud mouth, the ever-controversial spindle grille.