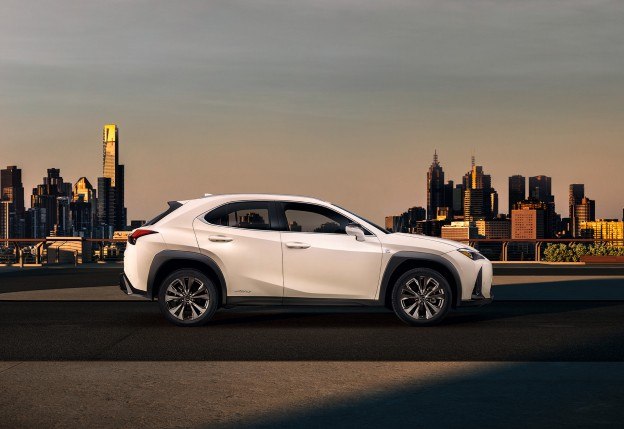 The Lexus booth at the 2018 Geneva Motor Show was abuzz thanks to the arrival of a new addition to the Japanese automaker’s lineup of vehicles: the 2019 Lexus UX.

According to their press release, the UX was designed from the ground up for the “modern urban explorer.”

“Right from the start, I focused on the target customer―mid-30s, millennials, men and women―and tried to understand how they would expect a luxury compact vehicle to change their lives and enable new experiences,” said Chika Kako, Chief Engineer of the UX, the first woman to hold such a position at Lexus. “That’s what led us to the basic vehicle concept for the UX of Creative Urban Explorer―a new genre of crossover.”

From the front on, there’s a slight resemblance to other Lexus models, but there’s definitely a new design language on display here. The spindle grille is unmistakably of the brand, and we’re also picking up shades of the slightly larger RX in its look, both of which are good things.

Its statement-making rear end, meanwhile, is highlighted by LED lights that span the entire width of the vehicle. Check out that smile!

The subcompact SUV fits into compact car spots and has a best-in-class turning radius, immediately making it suitable for most city dwellers. In the interior, the urban-friendly considerations continue with a highly driver-centric feel to the cockpit, great visibility from the driver’s seat and some interesting design features, like the use of the sashiko leather quilting technique (used for Japanese martial arts gear) on the seats.

Two powertrains are available. The UX 200 has a new 168-hp, 2.0-litre engine with thermal efficiency and a new direct shift continuously variable transmission. And the UX 2050h has the brand’s fourth-generation self-charging hybrid system producing a net 176 hp.

Another interesting point of note is the new global architecture platform, GA-C, which provides a low centre of gravity (lowest in its class, actually), improving rigidity and making it feel more athletic and agile.

This is Lexus’ first foray into the subcompact SUV segment and it looks promising. The 2019 Lexus UX is currently scheduled to arrive at Northwest Lexus in December 2018.