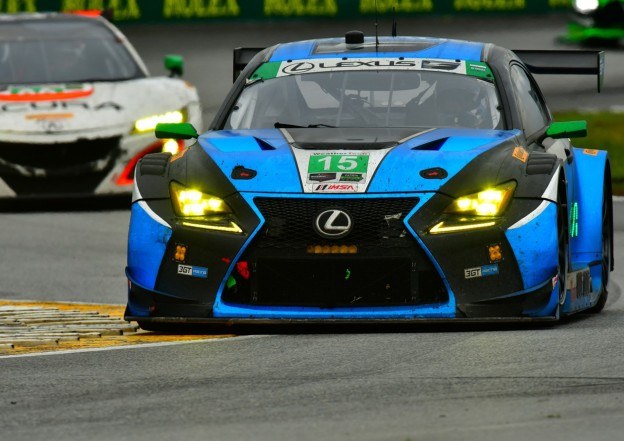 Tucked in the foothills of Mount Fuji in Japan is a racetrack that serves as the proving ground for Lexus. It’s home to Lexus performance vehicle development and the reason for the “F” in F Sport. Fuji International Speedway is a 4.5km course with 16 turns and one of the longest straights in a motorsport track anywhere. What better place to pursue the goal of “faster”?

But you don’t have to go to Japan to experience Lexus motorsport. The brand recently returned to the track in North America, entering two RC F GT3 vehicles in the GTD Class of the 2017 IMSA WeatherTech SportsCar Championship. Along with the Acura NSX, the Lexus RC F GT3s will be representing an entire nation of racing history in a series traditionally dominated by vehicles from everywhere else on earth.

Lexus Motorsport cut its teeth at the Rolex 24 At Daytona earlier this year, debuting their GT3 in a stunning blue livery. Behind the wheel of the No. 14 car was the team of Sage Karam, Ian James, Gustavo Menezes, and Scott Pruett. Unfortunately, their race was over too quickly, after a collision involving Scott Pruett forced the car to retire after 52 laps.

The No. 15 car of Robert Alon, Austin Cindric Dominik, Farnbacher and Jack Hawksworth put together a very solid effort, claiming 14th place in the GTD class over the 24 hour race. Both Farnbacher (15 laps) and Hawksworth (11 laps) each took turns leading the GTD class during the race but a couple of tire blow outs took their toll, pushing the team back into the middle of the field.

That’s racing. Lexus Motorsport will compete again at the Mobil1 Twelve Hours of Sebring from March 15 to 18. In the meantime, the team will use the Japanese art of kaizen to patiently and continually improve their skills and teamwork to become better and faster—just like the engineers and drivers at the F Sport test track in the shadow of Mount Fuji.

Even closer to home, the Policaro Automotive Family is investing heavily in its motorsport presence with the official formation of Policaro Motorsport – which has already enjoyed successes at a handful of international events. The Brampton-based automotive group also continues to be heavily committed to bringing the excitement of racing to the dealership experience through events like track days. This year, members of the Northwest Lexus community will once again have the opportunity to explore the potential of the Lexus F Sport performance range on a professional track. Here’s a look back at last year’s event at the Canadian Tire Motorsport Park: