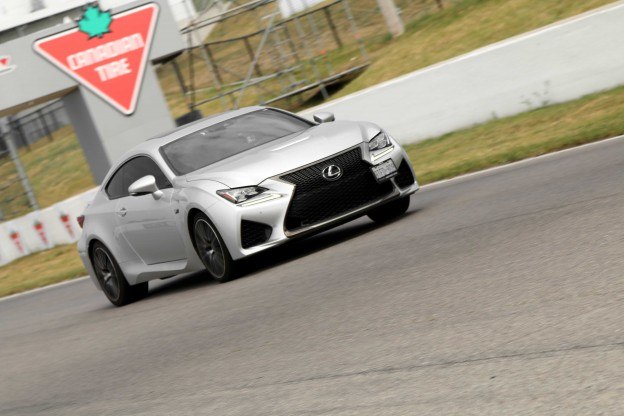 Performance driving has been on the minds of Southern Ontarians recently, with the fast-paced Honda Indy Toronto drawing approximately 170,000 motorsport fans to the GTA for the races and festivities.

And performance was also on the minds of the staff of Northwest Lexus and the guests who accompanied them to Canadian Tire Motorsports Park last week to test the capabilities of the 2016 Lexus GS F.

“We’ve been having a fabulous day, setting some new lap records, and everybody has been learning how to drive their cars a little more effectively,” said Anthony Poole, General Manager of Northwest Lexus. “We have the RC, and the GS F here today, and both cars have seen a lot of attention, some unexpected looks as we go around the track faster than the other cars. We’ve had a great time.”

Among the guests was Ontario-native racer Daniel Morad, who has been battling it out in the Porsche GT3 Cup Challenge in Canada and the US all year, including at the event at the Honda Indy Toronto this weekend. We gave Morad the keys to the 4-door sedan GS F to see what he could do with it on the track.

“This thing is supposed to be a family sedan, but I found out that the GS F will get you from zero to soccer practice in about 4 seconds,” said Morad. “It’s just unreal—I couldn’t believe how much power this engine has. It’s a 5L V8 putting out 467 hp and we used every single one of them on the track today. Not only that—the power is one thing—but you need good brakes and good suspension, good handling, and the GS F definitely offers that with a 6-piston front caliper, 15-inch rotors. As impressive as it is at getting from zero to speed, it’s just as impressive slowing down for these corners out here.”

Track days like this are important to Northwest Lexus. They give us a chance to foster our community by giving our valued clients and friends the opportunity to explore the potential of their vehicles in a safe and fun environment, as well as learn and test other Lexus products. Plus, it happens to be a whole lot of fun.

“This thing is supposed to be a family sedan, but I found out that the GS F will get you from zero to soccer practice in about 4 seconds.” – Daniel Morad