Northwest Lexus | Blog | A Policaro Automotive Family history: Looking back on 40 years in the dealership business

A Policaro Automotive Family history: Looking back on 40 years in the dealership business 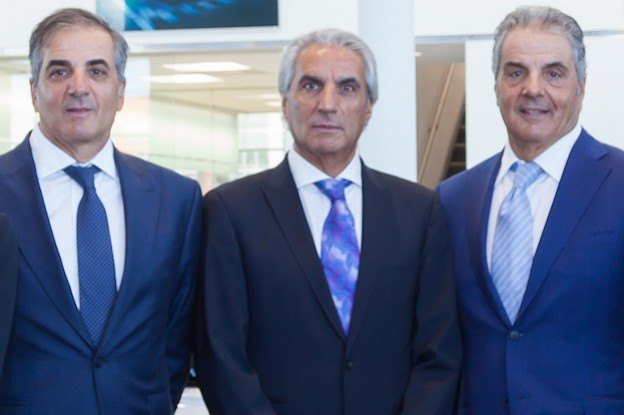 The first car Francesco Policaro ever sold was an Acura Vigor. He was 16 years old at the time.

If that seems unlikely (which it certainly is by today’s standards), consider that back in the late 70s and early 80s, when he was a child, the best place to find him on a Saturday morning was at the dealership with his father, Basil Policaro.

“Times were different back then,” recalls Francesco. “You wouldn’t let a four-year-old run around a dealership today, playing in the workshop and in the parts department and everywhere else, but back then it wasn’t like that. Back then I was putting gas in cars, I was collecting ball bearings from beneath benches, I was in the parts department driving the parts manager crazy, I was hopping in cars and playing with all the controls and changing gears. I loved it!”

Today, as the CEO of the Policaro Automotive Family business, Francesco sometimes brings his own son to work, setting him to the task of dusting the cars on the showroom floor for $1 each. It’s not the same method of learning the value of hard work that Basil used, but things change.

In fact, it was the promise of change that originally brought Francesco’s grandfather, and eventually his own father, to the Toronto area from their home in Southern Italy. In the early 1960s, with few prospects for work or progress in their small town and eight children to care for, Francesco’s grandparents migrated to Toronto where they purchased a home in Little Italy with their savings of $25,000.

As the second oldest brother in the family, however, Basil Policaro stayed behind, serving in the Italian military (mandatory at the time) before traveling north in search of work, which he found in Turin, at a factory that produced parts for Fiat. Then, at the age of 21, he joined his family in Toronto and began looking for work once again. Basil’s first job was delivering parts for a repair shop, but he was soon drawn into the world of automotive sales through an owner of a downtown Honda dealership who noticed the young man’s potential.

“My father went to work part-time for the owner of these Honda and Fiat dealerships in the early 70s and ended up out-performing the guys who were selling full-time, so he ended up moving into a full-time position,” says Francesco. It was this same owner who, upon hearing a one-year-old Francesco say his first word, “Honda,” on the showroom floor, opened his wallet and handed him a $5 bill. True story.

Years later, Basil got his younger brother Tony, now old enough to enter the work force, a position at the same dealership. Paul, the third brother, would also soon enter the workforce as a sales person at a separate dealership. The three brothers continued to sell cars, changing jobs a few times, moving from this dealership to that dealership, but mostly with the Honda brand and always within the GTA, earning themselves reputations as top-performers in their industry.

It was at this point that the opportunity to enter the automotive business as owner/operators rose to the surface. The dealership in Brampton that Paul had been working at was looking for partners.

“The brothers would always get together for dinner at their parents’ house on a Friday or Saturday night,” says Francesco. “It was here that Paul brought up this idea of buying into the dealership he was working at. Other than Basil who had a few dollars saved, however, nobody had any money. They basically invested everything they had, and with my grandfather putting up his house as collateral to the bank, they bought 50 per cent of this dealership in Brampton.”

The dealership flourished under the new partnership, rising to become one of the leading Honda locations in the country, but soon a disagreement between partners drove a wedge into the business, leaving the Policaro brothers with no dealership and a chunk of land off of Queen Street East in Brampton.

“The land that they got back then was swamp…there was nothing around,” recalls Francesco. “But they put the Hyundai store there and it became the number one volume Hyundai location in the country, with the three of them all under the same roof.”

And just like that, after over a decade in the industry, the Policaro Automotive Family business became an overnight success. In 1987, leveraging their strong relationships with the Honda brand, the brothers were awarded the first Acura dealership in Canada. From here, business continued to progress at a healthy rate: the Hyundai location was swapped for Toyota, and then, in 2000, they acquired another Acura location in Barrie and a Lexus in Brampton.

“I was eight or nine and I would go in—I don’t remember how or if I was getting paid back then—and wash cars,” says Francesco. “I loved going to work with my dad on Saturday mornings; I’d have my track pants and running shoes on, and I’d get to the back and start working. Then the coffee truck would come and I’d get a bunch of junk and put it on my father’s or uncle’s tab. It was a lot of fun.”

Francesco then worked his way through the various positions at the dealership, from washing the floors and taking out the trash to working in the parts department, the service department, and, eventually, at the age of 16, sales. Following his school career, he returned to the family business to serve in a sales management role. Twenty years and several management positions later, he now bears the title of CEO.

Having spent essentially his entire life up to this point working at the business his father and uncles built from the ground up, Francesco has some unique insights into the business.

“The entire industry has changed a lot,” he says, naming the development of computers, the Internet and social media as the three biggest catalysts of change. “Everyone and everything became a lot more sophisticated very quickly—the cars, the dealers, the customer, the manufacturer. All of a sudden, everybody was a lot more knowledgeable about the products and the process because of the information available.”

Change, though, isn’t something the Policaro family shies away from. Rather, it’s something they embrace. It got them this far, and looking forward, Francesco is certain the next generation will continue to face the winds of change with confidence.

“Autonomous and electric vehicles and the potential elimination of the dealership are all real challenges that I think we’ll face over the coming years,” says Francesco. “But by keeping our focus on the relationships we build between our clients and our employees—and it is humbling, frankly, to have these relationships with people who have been loyal for 30, 40 years—I think we’ll weather it well.”