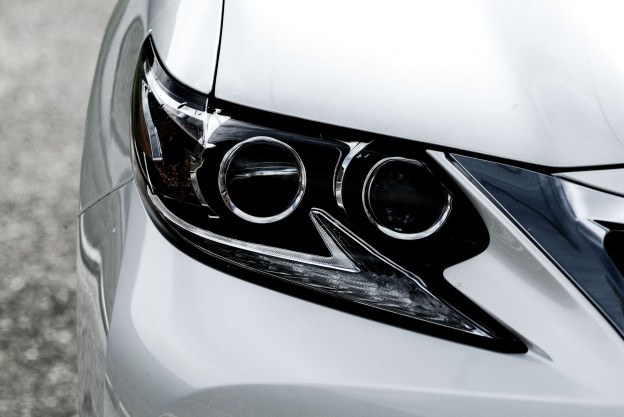 The ES has been part of the Lexus portfolio since the inception of the brand and, with the larger LS, has defined what to expect of Lexus vehicles.

A revised Lexus ES has just arrived at Northwest Lexus for the 2016 model year, a new generation of luxury sedan raising the bar once again in terms of comfort and equipment. Refined is certainly the best word to describe this new ES.

Powered by the well known and reliable 3.5 litre V6 with dual variable valve timing with intelligence (VVT-i), the 2016 ES 350’s performance is swift, thanks to its 268 horsepower. Not only is it swift, however it is also smooth and silky, pampering both driver and passengers as they should be in a luxurious vehicle. The six speed automatic transmission follows the quiet and smooth mantra of the brand by shifting gears in ways passengers will never notice unless paying very careful attention to it.
This powertrain combination does its duties smoothly while being reasonable at the pump. The 2016 ES 350 is rated at 11.4 l/100 km in the city, 7.6 l/100 km on the highway and 9.7 l/100 km combined.
Lexus directed its engineers to apply structural reinforcements to increase stiffness in the vehicle’s unibody construction; adapted from the Lexus IS sports sedan. This form of chassis tuning arms the ES with a significantly enhanced ride quality and improved handling, but does not translate in a harsher ride, simply offering a better feel of the road for the driver while passengers are quietly pampered.

The 2016 ES is the first Lexus production model to introduce the available Lexus Safety System +, which combines four key safety technologies into a single, fully networked package.
The Lexus Safety System + includes Pre-Collision System (PCS), Lane Departure Alert (LDA), Automatic High Beam (AHB) and Radar Cruise Control (RCC).
PCS detects vehicles and pedestrians by a combination of millimeter-wave radar and front-facing camera. It dispatches a warning as brake assist and emergency braking are activated.
LDA employs a camera to keep track of lane marking lines on the road. If the vehicle begins to unintentionally deviate from the lane, the LDA system will notify the driver with an audio-visual alert and vibration to the steering wheel.
AHB senses headlights from oncoming traffic and the taillight of the car in front, automatically adjusting hi-beam and low-beam illumination to help ensure optimal forward visibility during nighttime driving.
RCC uses millimeter-wave radar to detect the speed of the vehicle ahead in order to adjust the cruise control speed setting accordingly, maintaining a safe distance at all times.
Visually, the 2016 ES 350 is a great evolution from the previous generation, integrating the new look of front fascia with the brand’s trademark spindle grille as well as adding dynamic design elements all around the vehicle.

Up front, the grille is paired with newly designed headlights, now equipped with LED projector technology, while “L”-shaped arrowhead Daytime Running Lights (DRL) extend outside the headlight element, a design trait now found on most Lexus vehicles. The rear is complemented by improved, modern taillight design evoking the “L”-shaped theme of the DRLs and sculpted chrome-tipped rectangular exhaust ports.

The look is completed with multi-plane machined 20-spoke 17-inch wheels with directional spoke patterns, replaced by 18-inch wheels on the executive package.
Overall, the 2016 ES 350 looks sleeker, lower and longer.
Three new exterior colours join the ES palette: Deep Blue, Graphite Black, and Sonic Quartz. Each features Lexus’s innovative self-restoring coat, described by the company as a cutting-edge paint technology that allows the paint’s clear coat to heal itself even from light damage.

While the exterior is great, the interior is where the 2016 ES shines. Redesigned, it offers a luxurious, very spacious contemporary cabin supported by a sweeping dashboard integrating in a convenient way all functions expected in a modern luxury vehicle.

The steering wheel of the 2016 Lexus ES

As luxury also includes choice, a collection of new interior colour combinations, including multi-colour themes exemplify elegance; the seats are now offered in four different colours: Topaz Brown, Ivory, Moonstone and Black. Customers can also choose from three seat materials: leather, premium leather, and NuLuxe. In addition, four styles of interior trim are offered to harmonize with the colour choice.
A larger 4.2-inchThin Film Transistor (TFT) colour multi-information display places vehicle and route statistics as well as multimedia information front and center. To further enhance control over the Remote Touch Interface (RTI), the 2016 ES adds “Enter” buttons on either side of the interface.
If you are a fan of sunroofs, the panoramic glass power tilt-and-slide moonroof included in the executive package is impressive.
A strength of the ES which still rings true with this revised 2016 ES 350 is offering comfortable seating for five, but to do so in luxury while allowing very generous legroom to the rear seat occupants.

Revised, this 2016 ES 350 offers a higher level of refinement and better driver engagement without sacrificing the smooth, silky and luxurious attributes the model is know for.